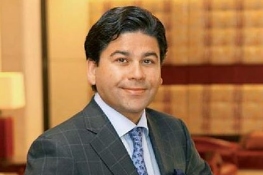 Shahal’s career as a professional spans over 25 years. His past experience encompass Senior Executive roles in Telecom, Real Estate, Energy, Natural Resources and Government Relations. He has been directly responsible for syndication of over five billion dollars (USD) for projects in the US, Europe, Middle East and Central Asia. Shahal was born in New York, educated at American University and Johns Hopkins University in Washington DC.

He is currently Chairman of Trinity White City Ventures, a SPV for investments of his holding company Burkhan. He is Executive Chairman of GDS360, a innovative Cybersecurity software company based out of NYC, Washington D.C. and London, UK.

In 2013 he was appointed Chairman of the Board of Colt Resources Middle East (CRME), a Mining and Exploration company focused on development of world class Copper, Lithium and Gold mining resources in Pakistan and Afghanistan. CRME is the first mining company to have acquired a exploration license in this region in over a decade. He co-founded CRME and advised its seed funding as well as strategic investment from investors such as CITIC (Chinese Sovereign Wealth Fund). Shahal was a Senior Advisor to the Board of Colt Resources (2012-13), a TSX listed exploration company with mining assets of Copper, Gold and Tungsten. Colt Resources also holds the largest area of land leases for mining in Portugal. He is a Board member of The Quimera Project, a R&D cluster based out of Barcelona, Spain, compromising of over 60 technology companies as well as leading universities that aim to commercialize technologies that have impact on sustainability.

Shahal was a founder of Global Voice Telecom, one of the first companies to receive a license for voice over the Internet in 1997 in the USA from the FCC, this company was subsequently merged into a Nasdaq company. Shahal was CEO of Centile, a software company located in the South of France, which was sold to the European Development Bank in 2005. He was one of four founders of a licensed tier one bank in Bahrain (2006), Fortune Investment House, with a authorized capital of one billion (USD) and was focused on real estate investments in Bahrain and the GCC.

In 2013 Shahal advised and completed a seventy five million dollar equity investment by Private equity fund Denham Capital into Enersis, a Portugese and Australian operator of large wind farms. In 2013 he also became a partner of GlobalTurk Capital, a merchant bank based in Istanbul that focuses on the Turkish markets. In 2015 he helped American Ethane Corporation of Houston as an advisor to negotiate with the Government of Pakistan to invest in up to six thousand megawatts of power projects in Pakistan with General Electric. In early 2015 he formed a consortium to bid for the hotel assets which included the Plaza hotel in NYC and the Grosvenor House in London, through TWCV Ventures a Dubai based fund created for that specific deal. In 2015 Shahal created the Al Noor Balochistan foundation. This foundation was setup to provide spiritual rehabilitation to the disadvantaged population of the province of Balochistan. The foundations goal is to provide the province with an investment in social as well as infrastructure that will allow them to create a sustainable society for the future. His relationships with senior government leaders have helped the foundation create a model for economic and social development for the region.

1. 1997-Global Voice Telecom: Main Investor, for a Voice over IP company that received the second license by the FCC for operations over the internet in the USA in 1997.  Grew the company to become the first to deploy networks in Saudi Arabia, Pakistan, the EU and Latin America. Company was merged into a NASDAQ company Callmate Telecom with a total market cap of $40m in 2001.
2. 2002-Global Voice Spain and Portugal:  Investor in the first retail Voice Over IP companies in both countries in partnership with Jazztel in Spain and Media Capital Group Portugal. Total company valuation of 20m euros was achieved in 2 years of operations.
3. 2004-CEO of Centile, France.  After a 55m euros investment in 2002, Centile headquartered in Sophia Antipolis France, was sold to the EBRD in 2005.  Today the company is the largest software company in its sector in Europe.
4. 2006-Al Rajhi-Reliance Group, Saudi 4th GSM license.  Led the formation of the consortium between Al Rajhi Bank KSA hired BNP Paribas as the lead banker and raised $4.2 billion USD for the bid.
5. 2007-Al Rajhi-, 2nd GSM license bid in Qatar.  Formed a consortium with Al Rajhi, SHK Hamad bin Jassim to bid for the 2nd GSM license in Qatar, raised $400m from internal sources for the bid.
6. 2007-Fortune Investment House (Bahrain), As lead sponsor formed a tier one Asset management bank in Bahrian with an authorized capital of $1b USD with prominent GCC families, Al Rajhi, Al Misnad (Qatar), Abu Kamsin (Kuwait). Al Babtian (KSA), Prince Sultan al Saud (KSA)), to invest in Real Estate in the GCC.  Created the $3.2 billion UPTOWN project in Bahrain Seef area.
7. 2011-Formed a partnership with Nat Rothschild to bid for the Renewable assets of Deutch Bank in Europe, a portfolio of over $1 billion.
8. 2011-Advisor to Videocon group for their Oil Refinery in Kakinada, brought in Glencore as offtake and equity partner. A $2 billion dollar project.
9. 2012-Founded and received mining licenses in Pakistan for copper mining, accumulated one of the largest portfolios for mining in Balochistan Pakistan and in Afghanistan.  Created Colt Resources Middle East, a company which was an SPV of Colt Resources TSX listed.  Negotiated a investment by CITIC China and grew the overall valuation of the exploration company to over $100m.
10. 2013-Signed a MoU with the government of Pakistan, American Ethane and GE to build own and operate 6,000mw worth of Gas fired power plants in Pakistan, a project worth more than $6 billion USD.
11. 2014-Advised Enersis Portugal and Australia and closed on a $100m equity investment by Denham capital into Enersis’s WIND farm portfolio in Australia of 500mw.
12. 2015-Made and Investment in Tech company Global Data Sentinel and became its Chairman, today company is valued at over $100m
13. 2015-Made a bid to buy out the Plaza Hotel from Sahara group for $600m as main sponsor and closed the contract, Plaza was later sold to Qataris due to technical reasons
14. 2017-Made a bid to buy the Ritz Carlton Central Park, Dreams Hotel downtown
15. 2018 December he made a bid to invest with Minor group of Thailand as main sponsor for portfolio of hotels worth $600m
16. In Q4 2018 Shahal finalized a JV to create a destination hotels with Universal Music group for in Washington D.C., NYC and the Dominican Republic, with an estimated portfolio to be worth over $2b by the end of Q1 2019.
17. He is a partner in a hotel development in Miches, Dominican Republic which is developing a 5 star resort on 30 acres next to the new Four Seasons DR.